I really, really like lemon poppy seed cake and muffins.  This comes from my adoration for any type of pound cake.

On my Edible Tapestry to do list, I have had for months listed the idea to make my own poppy seed muffins.  Poppy seeds are so expensive, however, that I refused to pay $8 a jar just so I could make one recipe with them.  But over the weekend I found a bulk container of them for a third of the price at a store I rarely shop in.  In the cart they went.

It’s too late, however, to make an entire pound cake for my new heart healthy family, or too early, depending on how you look at it.  We have learned by carefully calculating the nutrition information on everything that my husband eats what he can and can’t have and are meticulous about all of the portions and ingredients that go into all of our meals.  A pound cake sitting on the counter right now, when we are learning and adapting is just a bad idea.  Later on when his heart bruising is healed, a transition that we were told could take weeks or even months, and his mesh stent is securely grown into the lining of the affected artery, I can play around a little more with recipes. Right now keeping his blood pressure down is key.  Eating things he can’t have in front of him, things we don’t need anyway, is no fun, either.

One of the things we have discovered in the last month is that a lot of chain restaurants have a nutrition guide that lists all of the facts on all of the dishes they serve.  It has been a godsend for my husband.  It really helped one day when we were traveling far from home to pick up his medical records and needed to stop for lunch and on two other occasions when we thought we would go nuts from eating rabbit food and I from having to prepare every single thing that goes into his mouth.  There are no cardiac. diet convenience foods, that is for sure!  But of all the restaurants that I can think of I would never have guessed that Fatz was the one where he would find the most satisfying  restaurant meal that was still within his sugar, fat, carbohydrate, and sodium limitations for the day.  He has to save the amounts up for the entire day to eat an evening meal there but it works.  And even though the amounts are within his limits he can no longer eat a full restaurant meal since changing his eating habits because his portions have decreased so greatly that his stomach size has as well.  So he can take what he is already allowed to have and cut it in half, enjoying the rest for lunch the following day.  It really works and he feels less deprived knowing that he can go out for one of his favorite meals on occasion.  I love knowing that I don’t always have to cook.  Another indication that this little system is working is that he is steadily losing weight, a little every day, actually, and maintaining a normal blood pressure.

On our second Fatz trip to get us out of the house a little bit and to give me a break, we all splurged and had dessert.  My husband had a light mousse they have on the menu and I thought I was going really overboard on my numbers (intentionally and a little rebelliously since I had tenderloin tips and had them leave off the mushroom gravy and grilling spices which were loaded with junk) by having one of my favorite desserts, bread pudding.  Only this bread pudding was made with Fatz’ poppy seed rolls, which, if you’ve had them you know, are deep-fried puffs that are more like doghnuts than rolls.  What do you expect from a restaurant called Fatz?

It was a small portion, thank goodness, and absolutely amazing drizzled with whiskey sauce.  Almost as good as the completely bourbon saturated serving I was given at the Chattanooga Choo-Choo Hotel several years ago that left me feeling tipsy on the walk back to our hotel room which was located at the far end of the complex, opposite of the station and restaurant.  I’ve been wary of whiskey sauces since, but Fatz’ was just a small enough drizzle for each bite to be dipped in, though I joked about feeling buzzed by the time I had sopped up the last dribble of sauce.

When I got home, I decided to look up the bread pudding on their nutrition tracker to see what the damage was, just how many calories and fat I had consumed with my little revolt.  As it turns out, because I had eaten only half of my meal, I was still under with my numbers.  Woo hoo!

You’d think I would have had enough poppy seed bread to last me a while, but no, that’s not how my brain works.  My poppy seed muffins were still on the list so I got down to it this morning.  I knew they would have to be whole wheat, it will be a while before I buy white for even a treat now and then, and low in sugar, sodium, and fat.  I decided to add strawberries to my original idea and changed the recipe from muffins to cake pops.  I just love that little cake pop/donut hole maker, you know.

I can’t find away around using baking soda and powder in baking, so my husband will still need to watch the amount of puffs that he eats.

With the first bite I thought “ick”.  Then I bit into a strawberry chunk and went, “eh”.  After dusting them with a little powdered sugar and taking another bite…”mmmm”.  I was very pleased to have an actual pastry to sit down and eat with my morning coffee.  One of my boys said they tasted like Froot Loops.  I disagree, but score one for me!

The zest and juice of one lemon.  They were a little bitter, so the zest could be cut in half or more sugar added.

Let sit for 10 minutes to allow strawberries to macerate.

I won’t always take the time to put the nutrition information at the bottom of recipes but I was curious to see what this recipe amounted to so went ahead and did some figuring.  These amounts are approximate. 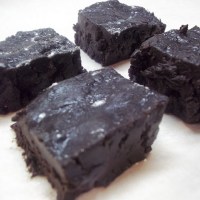 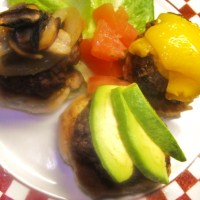 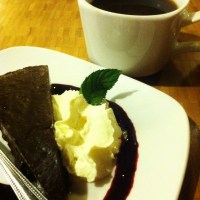 Warning: file_put_contents(/home/content/66/11712466/tmp/etsyEdibleTapestry_cache_edibletapestry.com.json674921113.tmp): failed to open stream: No such file or directory in /home/content/07/14001707/html/edibletapestry/wp-content/plugins/etsy-widget/etsy-widget.php on line 165